Over the last ten years, football has been Spanish.

Whether it’s the National Team excelling in international tournaments, the performances of La Liga sides in European competitions, or the quality of players and managers that are being attracted to its league, Spain is victorious.

Here are the reasons why Spanish football, with its tiki-taka system, has been so dominant over the past decade:

The National Team that won it all through Tiki-Taka

The Spanish National Team has been an example for all. Spain have spent six of the last nine years as leaders of the FIFA World Rankings. In 2012, La Furia Roja (The Red Fury) became the first nation ever to win the UEFA European Championship (2008), FIFA World Cup (2010) and the UEFA European Championship (2012) in succession, when they beat Germany, Holland and Italy in the respective finals.

The leaders over the last few years: Spain have dominated the ranking. (Image source: www.wikipedia.com)

Besides surpassing the successes of former great sides such as Pelé’s Brazil in the late 1960s and West Germany of the following decade, Spain have achieved their triumphs through an entirely new brand of football, introduced by the late and great Johan Cruyff in the early 1990s at Barcelona, known as tiki-taka.

“Though it would take well over a decade for the mesmerizing style to bear its first fruit on the international stage, those vital formative years would breed an entire generation of players at every position who learned the patience and skill necessary to make tiki-taka work.” Charlie Melman

Tiki-taka may have worked its wonders, but I for one always felt a certain unease when a team using this style retained 75% of ball possession yet failed to score, or scored a few goals, in a handful of shots across ninety minutes. The pinnacle of this was the 2010 World Cup, in which Spain were crowned champions having scored just 8 goals in 7 matches! Surely this wasn’t efficient?

Pep Guardiola, the then Barcelona manager who developed the concept further at club level, was highly successful having taken a crop of wonderfully talented players and dominated Europe over the years. He, too, did not accept the pure definition of tiki-taka, though, which is often taken to be a ‘slow, directionless extreme’ that sacrifices effectiveness for aesthetics.

It is hard to argue with Pep… except that he hasn’t been overly impressive in his ways. His sides do have a history of retaining possession rather inefficiently, whilst also being unable to adapt to changing scenarios due to his belief in his primary system.

A couple of years after Guardiola’s departure, Luis Enrique was called upon at Barcelona, and his first season saw a more direct and effective Barcelona which won the treble and ended the season as arguably the best side in football history. His predecessor at Bayern Munich, Jupp Heynckes, also found the perfect football balance between his side’s ability to retain possession, counter-attack and play direct football when necessary – something that Pep never managed to achieve, even when he had the best target man of the last decade in his ranks in Zlatan Ibrahimović. In fact, under Heynckes, Bayern Munich became the first German club in men’s football to complete the treble – a feat which Guardiola didn’t manage to replicate prior to his departure for Manchester City; despite having signed the most expensive German in Mario Götze.

Today we find many variations on Cruyff’s bit of genius, and they’re not necessarily coming out of Spain. The Germans won the latest World Cup through a brand of more direct yet scintillating football, which works in line with the tiki-taka roots of continuous movement off the ball, coupled with quick passing, which tires opponents, intimidates them, and upsets their balance as a means of exploiting gaps in or behind their back line.

The Spanish National Team has been the best over the last decade, and it has been purely tiki-taka. Luis Aragonés initiated the process which was carried on by Vicente del Bosque – but their failure to qualify from the group stages of the most recent major international tournament, and having dropped to sixth in the FIFA World Rankings due to the different strategies being used by competitors, indicate that a change of style may be required for La Roja to bounce back to the top.

The most successful teams in Europe

At club level, Spain dominates too. Real Madrid and Barcelona are undoubtedly the biggest clubs in the world. Barcelona have been the most prolific team since 2000, while Real Madrid have won a record 10 Champions Leagues (and might soon add to that tally – watch this space…). Meanwhile, Sevilla have regularly won the Europa League (or UEFA Cup as it was previously known) over the last few years, and other clubs such as
Deportivo, Atlético Madrid, Valencia, Athletic Bilbao, Málaga, Espanyol and Villarreal have also had their say in recent European football. Barcelona boasts La Masia, which is probably the best youth academy around today – while Real Madrid’s Castilla isn’t too far behind. Sevilla have one of the best recruitment networks in Europe, and other Spanish teams are playing their part when it comes to developing quality players like Isco and Cazorla. With Valencia having won La Liga not too long ago, and Atlético Madrid now in on the act, the argument of many critics that “it’s always the same two teams” has been diluted. Earlier this season, Spain became the first country to have five teams qualify for the Champions League group stages.

“In the last seven seasons, Spanish sides have won the Champions League four times: Barca in 2009, 2011 and 2015; Madrid in 2014. And in the Europa League, something similar has happened: Atlético won it in 2010 and 2012, while Sevilla have claimed the trophy in each of the past two seasons.” Ben Hayward 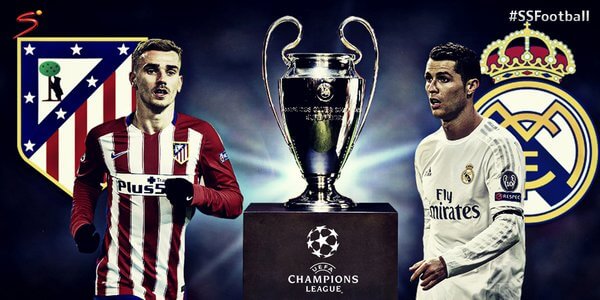 Atlético Madrid and Real Madrid will come face-to-face again for the 2016 Champions League Final in Milan, a repeat of the 2014 final in which Real Madrid were victorious. (Image source: SuperSportTV)

The best players in the world

Cristiano Ronaldo, Lionel Messi, Neymar Jr, Gareth Bale, Luis Suárez. The top five players in the world. And it’s just a matter of time until the sublime Paul Pogba chooses between one of the two biggest clubs. There can be little argument about the quality of footballer that La Liga has been attracting.

Proof in the pudding: I introduce the FIFPro World XI of 2015.

No less than 8 players from La Liga made it into the latest iteration of the FIFPro World XI!
Real Madrid and Barcelona each owned 36% of the team. (Image source: pfascotland.co.uk)

Managers just want to be there

José Mourinho. Pep Guardiola. Luis Enrique. Diego Simeone. Massimiliano Allegri. Jürgen Klopp. Unai Emery. Joachim Löw. Carlo Ancelotti. Laurent Blanc. Gary Neville (just kidding…). What do these managers have in common? Firstly, they’re great managers. So much so that they were voted as the Top Ten of FourFourTwo’s Best Managers in the World (2015)*, in the order that I have presented them. Secondly and most importantly, the majority of them have spent a substantial amount of time in La Liga over the last few years – more than they’ve spent in any other league. Great managers want to manage in Spain!

*FFT’s criteria for selection is explained here: “Some managers have made it because they’re straight-up winners; others for their almighty man-management or tactical nous. All of them share one key trait, though: the ability to lead, and lead well.”

Do you agree with my reasoning behind Spanish football being the best? Do the millions spent in England make it better? Does the passion that is exhibited by German football make it the leader? Comment and vote below.